A NO-DEAL BREXIT could have “adverse consequences” on the prices consumers pay for groceries, according to a Central Bank report.

As well as slashing economic growth, a no-deal Brexit could result in 73,000 fewer jobs in Ireland by the end of 2021.

“While the underlying outlook for growth in the economy remains positive, there are significant domestic and external risks and uncertainties which threaten that outlook, most notably Brexit,” Mark Cassidy, the Central Bank’s director of economics and statistics, said.

“If a disorderly, no-deal Brexit can be avoided, it is projected that underlying economic activity will grow at a relatively solid pace in coming years, though with some moderation in growth in prospect.

“In a no-deal scenario, however, significant disruption and the negative shock to economic activity would adversely affect output and employment and the path ahead for the next few years would be very different.”

Among the topics analysed by Central Bank economists was the impact a hard Brexit might have on grocery prices.

Ireland’s geographic location makes the cost of importing goods relatively high, a trait the country shares in common with other remote eurozone markets like Cyprus, Greece and Finland. A disorderly Brexit could lead to a change in trade and transport patterns, creating additional shipping costs.

The rollout of tariffs might also be passed on to consumers in the event of a no-deal Brexit, which would make the weekly shop more expensive. Import duties would particularly impact breads and cereals as well as dairy produce, the report found.

Existing traits of the Irish grocery market would also have a role to play.

Economists said that consumers here have already experienced “persistently high” prices. That’s because the market is highly concentrated with the top-five retailers accounting for 90% of all sales, reducing competition and allowing for higher mark-ups and greater profitability, the analysts said. 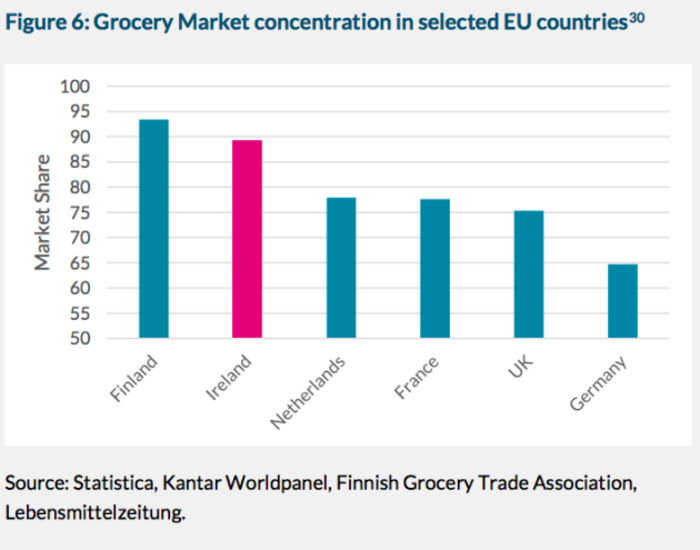 The pundits noted that UK chains have a “significant presence in Ireland” – Tesco had the third biggest slice of the market as of July, closely behind indigenous chains SuperValu and Dunnes Stores.

Given the fact that grocery retail in Ireland is more profitable than many other eurozone markets, pundits said it is unlikely that UK-based chains would exit Ireland “thereby further increasing market concentration”.