PRIMARK’S LONG-STANDING DIRECTOR Breege O’Donoghue will leave her job with the budget clothing giant after 37 years with the firm.

The company director, who will celebrate her 72nd birthday later this month, joined the outfit to set up its HR operations in 1979 when it had just 24 stores.

Primark now has 310 outlets in 11 countries, including 36 in the Republic, where it trades under the more familiar Penneys name. The company has about 60,000 permanent employees worldwide.

In a statement, the company said O’Donoghue had “decided to move on to her next phase of life” and that she would be stepping down from the firm’s board in September.

She currently serves as its head of new markets, which has seen her spearhead Primark’s international push. The company said she would continue working as an ambassador for the firm, while she is also a director of cider maker C&C Group. 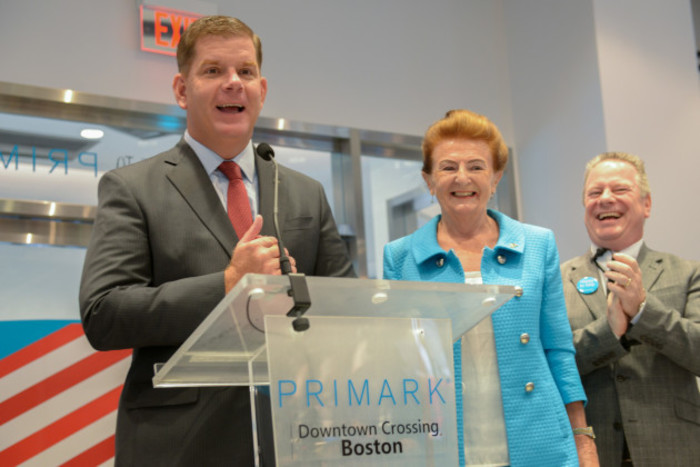 O'Donoghue at the opening of Primark's Boston store
Source: RollingNews.ie

Primark opened its third US store, in Connecticut, last week, with plans to launch in another six locations in the country, while it also unveiled its first Italian store, in Milan, in April.

Last year O’Donoghue told the Irish Times she “couldn’t contemplate retiring”, adding that she was still “in love with Primark”.

She joined Primark just 10 years after its first outlet, a Penneys, was opened on Dublin’s Mary St by Arthur Ryan on behalf of the billionaire Canadian Weston family, who still control its parent company, Associated British Foods.

Last year, it delivered more than £5.3 billion in revenue and £673 million in operating profits for its owner – dwarfing the conglomerate’s income from its grocery and other businesses.