Last month, overarching plans for the Balgaddy-Clonburris scheme were given the green light by the local council for south Dublin.

The new town, which would be located between Lucan, Clondalkin and Liffey Valley, is roughly 280 hectares in size and would have the capacity for nearly 8,500 homes and more than 21,000 people.

Stock exchange-listed housebuilder Cairn Homes is the biggest owner of land in the area, with 72 hectares of its land portfolio located south of the Grand Canal and north of the Dublin-Kildare railway line.

The company, which is one of the largest residential construction firms in Ireland, has previously stated that it would be in a position to begin development of the site next year.

Following the council’s vote to approve the scheme, local representative and former South Dublin County Council mayor Paul Gogarty lodged an appeal with An Bord Pleanála against the plans for Balgaddy-Clonburris.

Last month’s vote on the scheme by councillors was one of the final steps that needs to be taken before the area is officially ratified as a ‘strategic development zone’.

That designation would allow developers to go through a highly-streamlined process in order to gain planning permission for different aspects of the project.

Individual projects within the zone also couldn’t be appealed to the national planning authority under the system.

According to the latest planning filings by An Bord Pleanála, only one objection has been lodged against the scheme to date. The appeal process is likely to take several months. 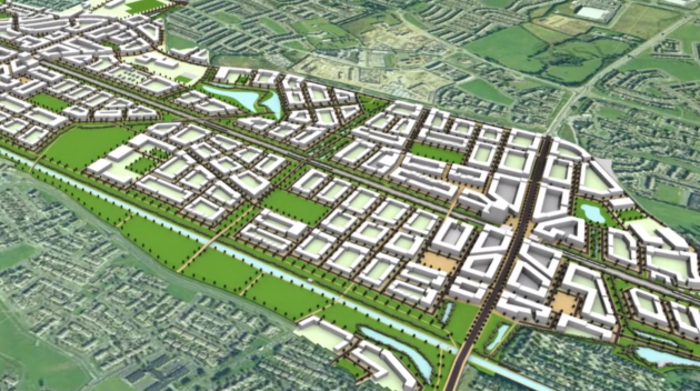 A proposed image of the south Dublin scheme
Source: SDCC

When the plans for the new strategic development zone were approved by the council last month, former Green Party TD Gogarty told TheJournal.ie that the plan for Dublin’s newest town was “one of the worst ever”.

He said that other councillors have “voted down” motions put forward that would improve transport infrastructure in the area and make the scheme more sustainable.

“Efforts to put in orbital bus services on the outer ring road were scuppered in case they might ‘delay housing’. We got some stuff passed still on trains, but not enough overall,” Gogarty said.

He added that the “web being spun” by other councillors that he was trying to prevent social housing being built in the area was “incorrect and mischievous”.

When the plan for the new strategic development zone was provisionally approved by the council by 24 votes to nine in June, other councillors also aired their concerns about the scheme.

Fine Gael councillor Emer Higgins said she has serious concerns about the capacity of the transport infrastructure in the area to deal with an influx of 21,000 people.

However Sinn Féin councillor Mark Ward said he was happy to see that the scheme – which could provide 2,700 units of social housing – was approved.

He said he was “aghast” to see Fine Gael councillors voting against the plan which he felt was “in contradiction to what their minister states is needed in social housing”. 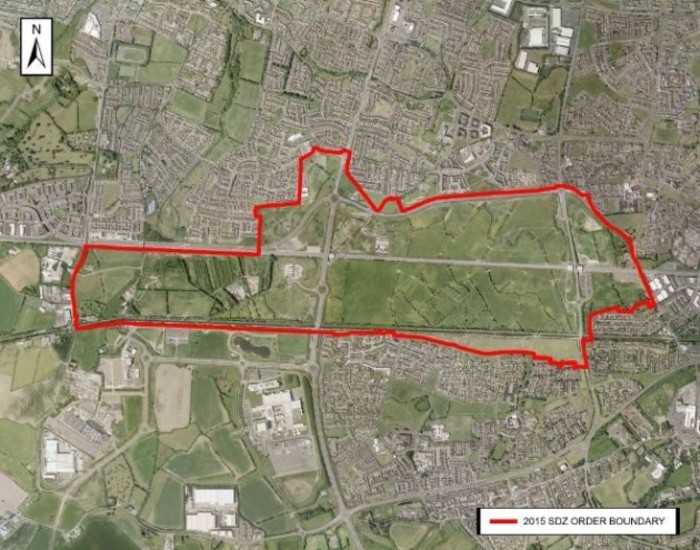 An overview of the Clonburris boundary
Source: SDCC

The plans for the Clonburris strategic development zone would also involve the creation of eight new schools and two train stations.

Some 21,000 sq m of the area was zoned for retail and 90 hectares has been set aside for green spaces and parks.