ENVIRONMENTAL CHARITY AN Taisce has delayed the construction of a mixed-use development on a vacant lot in Dublin’s city centre over concerns that it will spoil the view from Dublin Castle.

Plans for the development included the construction of new apartments, a convention centre, an exhibition gallery, a pedestrian street and a café, across two blocks.

However, An Taisce has put the brakes on the development on the grounds that it would “produce an excessively high and bulky building”. The case will be heard in July.

In its written appeal to An Bord Pleanála, the conservation group said the height and shape of the proposed development ”would adversely impact on the setting of the protected structures at Dublin Castle” and “would be visually obtrusive in views from within the castle lands”.

While the development of the vacant site “is welcome”, An Taisce said “it is essential that existing building profiles and height lines should be followed and the streetscape be reinstated in a coherent, sympathetic manner respecting the hugely important Dublin castle medieval site opposite”.

“The primarily six-storey street-parapet to the proposed Ship Street Great frontage represents a wholly inappropriate three-storey increase above building heights on the opposite side of the street,” it said. 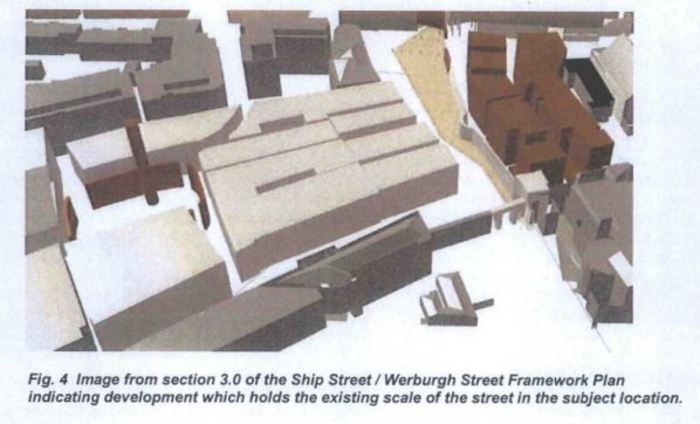 The Ship Street Great-Chancery Lane development is ‘phase two’ of a plan to redevelop the historic area in the capital’s south.

‘Phase one’ consists of an 103-bedroom extension to the four-star Radisson Blu hotel on nearby Golden Lane, which is also the subject of a planning appeal by An Taisce.

The plans for the phase-one construction by Luxor Investments featured an eight-storey extension that would bring the total number of rooms at the hotel to 255.

The size of the extension was reduced to six storeys by city planners, but An Taisce told An Bord Pleanála in its appeal that the extension would still “constitute gross overdevelopment” and “would adversely affect the residential amenity and value of adjacent properties” due to its size.