EXECUTIVES AND KEY figures at AIB are in line to receive large deferred bonuses worth up to the equivalent of their annual salaries.

Detailed in the bank’s annual report today, the new share scheme will apply to executive directors, members of the leadership team and other senior staff at the state-owned bank.

However, executives covered under the bonus scheme won’t be able to cash in on the awards until the State has been reimbursed in full for its €20.8 billion bailout of the bank. More than 70% of the bank remains in taxpayer hands after a share sale in June.

In the annual report, AIB chairman Richard Pym said the new bonus scheme is in line with the prospectus the bank published ahead of its market flotation last year.

He said the scheme, called the ‘deferred annual share plan’, will be put to a non-binding advisory vote at the bank’s annual general meeting in April, but permission from the Minister for Finance will also be required.

The bonus plan has been designed to help retain key staff at the bank, according to Jim O’Hara, the chair of AIB’s remuneration committee.

He said the bank is still “governed by restrictions” contained in its agreements with the Irish State following its recapitalisation of the bank at the turn of the decade.

One of these “restrictions” is a €500,000 cap on salary paid to each executive director at the state-owned bank.

“In light of these restrictions, as reported in previous years, the group is unable to implement a competitive market driven compensation and benefit structure to retain and incentivise key executives,” said O’Hara.

“This remains a key risk for the future stability and performance of the group and is of utmost concern to the committee and the board as a whole.”

He added that the bank’s board has outlined these concerns about the absence of market-based pay.

“This will likely result in the loss of key members of the senior management team which, in turn, may lead to a change in the strategic ambition and direction of the group.” 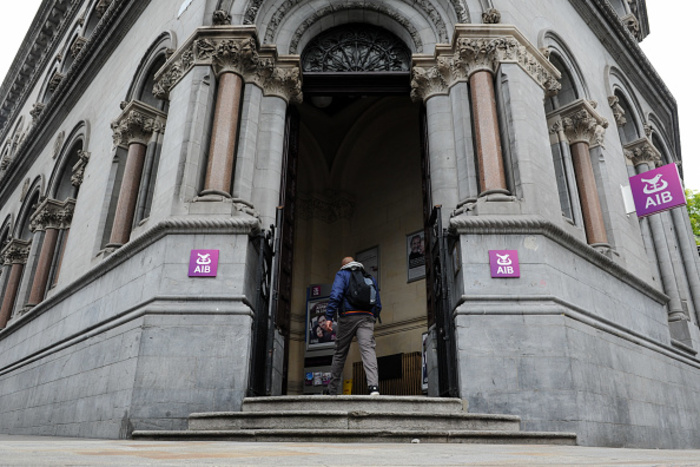 According to the annual report, awards included in the ‘deferred annual share plan’ will be up to 100% of a senior employee’s salary deferred into shares with no cash element.

These awards will vest over a three- to five-year time frame. It is intended that the first awards under the bonus scheme will be awarded in 2019 based on performance in 2018.

“Whilst not a long-term retention tool, the committee considers that the design of the ‘deferred annual share plan’ should somewhat mitigate the heightened retention risk which currently exists until such time as the group is able to return to normalised remuneration practices,” the report said.

Earlier today, AIB announced that its pre-tax profits amounted to €1.6 billion for 2017.

The figure is a slight dip on the figure of €1.7 billion registered the previous year, despite a significant increase in the bank’s net interest margin – the average amount it makes on its lending – and decline in its impaired and non-performing loan book.

The bank also set aside another €40 million to cover the potential costs of the tracker mortgage scandal.

Speaking about the financial results, Investec analyst Owen Callan noted that the results were “strong and stable on most items with margins holding strong amid the slight dip in mortgage market share”.