MULTINATIONALS IN THE shared economy space have encountered roadblocks as they tried to establish themselves in the Irish market.

In the past year alone, complications in the Irish tax system caused panic among Airbnb users and taxi laws have prohibited Uber’s ridesharing plans in Ireland.

A new group called ShareIreland that has been set up by Elizabeth Douet of the international group Collaborative Consumption is aiming to unite shared economy businesses and inform policy in the space going forward.

Douet said despite some skepticism towards the sharing economy, it is not a fad.

“The response (to the sharing economy) has always been it is just a fad or a fringe thing that is going on. It is not (on the) fringe, it is really a new economy that is going forward,” she said.

“It is being built on an old economy framework and that is where some of the friction come up, but let’s bring all players around the table, get the viewpoints, and then shape or impact policy going forward.”

Last night, there was a gathering of shared economy leaders at CurrencyFair’s offices to discuss the formation of a group to represent their common interests. 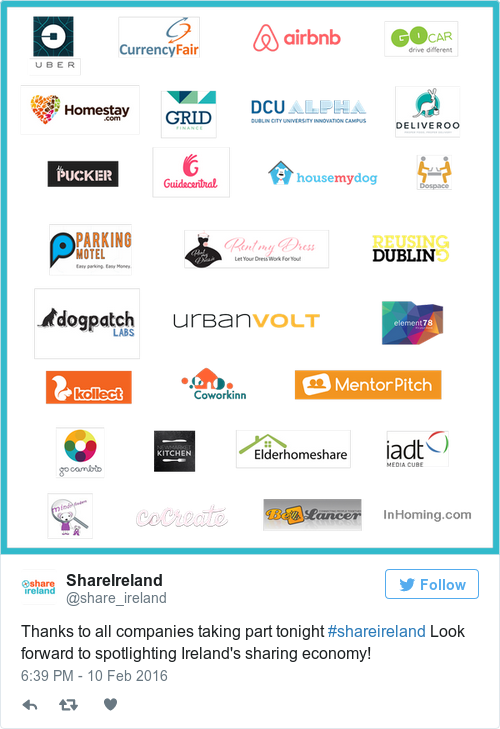 Like Uber and Airbnb, smaller companies such as Grid Finance and RentMyDress.ie want to join the drive to develop a successful shared economy in Ireland.

Grid Finance head of sales and marketing Andrea Linehan said it is great to have larger companies helping, but the real drive needs to come from homegrown SMEs.

“(Uber and Airbnb) really accelerate the awareness about the sharing economy, but really if we want Ireland to be a leader in this area we want to be known for it due to our homegrown sharing economy companies,” Linehan said.

“That will be up to companies like us to make sure we are involved in the committees and we’re the ones pushing at a policy level to get more recognition about the sharing economy. Uber and Airbnb might be able to open the doors because of the weight that they bring, but we should be leading the charge.”

RentMyDress.ie founder Debbie Moriarty, whose business gives users the chance to hire clothes straight from their peers, said she is confident that within a year their work will ensure the term shared economy in Ireland will become mainstream.

“I am committed to being involved. I’m a normal voice of the sharing economy and it is within everyone’s reach to be part of this,” she said.

“It’s happening and people don’t realise it is happening. Roughly 3% of the workforce in the UK are involved (in the shared economy). We can have a group so driven that within a year I believe even the word sharing economy will be mainstream in Ireland.”

On an international level, a cohort of companies in the space are lobbying the EU to address laws are restricting the growth of the sharing economy.

Airbnb, Uber, and TaskRabbit and 44 other companies are petitioning the incumbent president of the EU and Dutch prime minister Mark Rutte and they are hoping for a solution that will eventually see the creation of a single digital market.

The UK government has been at the forefront of the sector, with Sharing Economy UK (SEUK) undertaking a government-mandated report into the area earlier this year.

Douet said it is important for Ireland to create its own approach to the sharing economy and not simply copy existing models in other European countries.

“We can’t look at SEUK or OuiShare Paris and quickly apply (what they do) here, but we can take the elements of all of those that work and build something really great in Ireland.”

She said Ireland has key components needed for a successful sharing economy, such as successful startup scene and some of the best innovation labs in Europe, but a united approach is needed.

“I look at Germany, Holland, France, and the UK in the work that I do and I think there is everything in the ecosystem here to really make Ireland a world voice on (the sharing economy) and lead the way forward in this new economy that is being constructed.”