A STATUS RED weather warning and widespread public safety notices have prompted many businesses to close today as Ireland prepares for ex-hurricane Ophelia.

Business lobby groups have issued advice to members on how to prepare for the extreme weather, which Met Éireann has predicted to be the most severe weather event to hit the country in more than 50 years.

With that in mind, here’s what business owners need to know about Storm Ophelia. We will be updating this story throughout the day with any further information:

Lobby group Ibec issued a statement during the night encouraging “all businesses to minimise the movement of employees”.

“Safety should be of the utmost priority,” it said.

Ibec encourages all businesses to minimise the movement of employees tomorrow. Safety should be of the utmost priority. #StormOphelia

Small business representative ISME  issued similar advice. It said employers have a duty of care for all employees under the Safety Health and Welfare at Work Act.

Business owners main consideration “needs to be whether it is safe to ask their employees to travel to work”.

If staff have been asked to attend work today, employers must consider what plans are in place to ensure workers can get home safely. Information should be communicated as early as possible to allow people to plan.

“Anyone who is asking employees to come in should be advised to remain vigilant throughout the day for worsening conditions and cancelled/amended travel services and should consider how long it will take people to commute home safely,” ISME said.

Meanwhile Dublin Chamber of Commerce has encouraged employers to remain flexible over the next 24 hours and to keep an eye on Met Éireann updates. 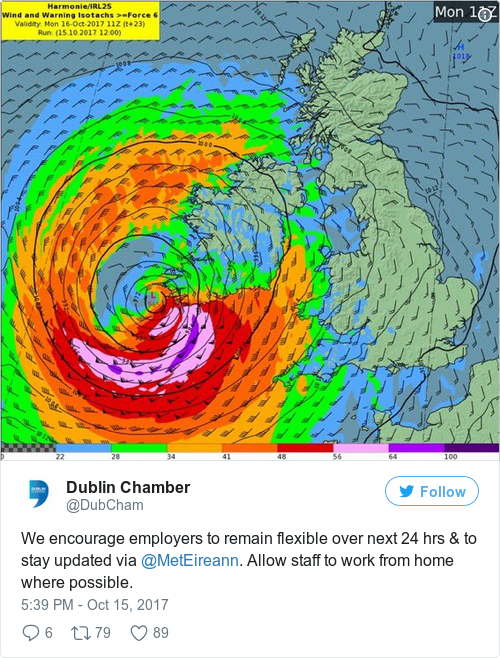 We encourage employers to remain flexible over next 24 hrs & to stay updated via @MetEireann. Allow staff to work from home where possible. pic.twitter.com/o8QmgeCFDA

Some business owners may be unsure whether or not staff will be paid if they are unable to attend work because of the storm.

ISME boss Neil McDonnell told Fora that some businesses – primarily in the services sector – may not be able to pay workers because they cannot provide a service as a result of the predicted severe weather.

“They may be forced to announced that they are laying off the workers for the day,” he said.

ISME’s overall advice is that any disruption to business today will likely be covered by a ‘circumstances beyond our control’ clause in an employee contract, which allows business owners to not pay workers in unforeseen circumstances.

“But you have to have it in the contract,” McDonnell said. “If you’re going to exercise that right, you need to let the staff know immediately and not on pay day.”

Many of Ireland’s banks are set to close most or all of their branches today.

Ulster Bank has closed all of its branches across the Republic as a precaution, with Storm Ophelia due to make landfall. Its branches in Northern Ireland will close at 1pm.

AIB has decided to close all of its branches “in the interest of customer and staff safety”.

Bank of Ireland said that all of its branches are now closed.

The company also said in a tweet: “Due to the current red weather warning some services will be disrupted today. We’ll update here throughout the day. Thanks for your patience.”

A spokesman for Permanent TSB said that it has advised staff this morning that its entire branch network and head office will remain closed for the day.

“The bank apologises for any inconvenience this may cause but the decision has been taken to ensure the safety and well-being of all staff and customers,” the spokesman said.

The Irish Stock Exchange said the trading system and all essential services are operating as normal. However, “non-essential staff” have been sent home for the day.

The Central Bank of Ireland has advised its staff to stay at home. “Core services will be maintained,” it said.

A number of public services will not be operating today.

An Post said mail delivery and collection services have been suspended everywhere except: Dublin, Meath, Westmeath, Leitrim, Louth, Longford, Cavan, Roscommon and Monaghan. In these counties services will cease by 12pm to ensure staff safety.

It said it is monitoring the situation on a county-by-county basis.

The Courts Service said that almost all court sittings – including all due to take place in the Supreme Court, Court of Appeal, High Court, Special Criminal Court, Circuit and District Courts -  have been postponed.

For a full list of disrupted public services, see here.

The Luas will cease to operate at midday today.

Dublin Bus has stopped all services for the day. Normal service is due to resume in the morning.

Bus Éireann has cancelled all services nationwide until 5am tomorrow.

After the 13.36 Dublin Connolly to Rosslare train, Irish Rail stopped all services for rest of day.

Flights were cancelled at Dublin, Cork, Shannon, Knock and elsewhere. Travellers are advised to contact their airline before going to the airport.

Cork Airport confirmed that there will be no further departures today but some flights may still be arrive.

Shannon Airport has not closed and flights have been arriving and departing but there may be disruptions and delays.

Dublin Airport is also remaining “open and operational” during the storm but up to 160 flights have been cancelled.

At Ireland West Airport in Knock, flights by Aer Lingus, Ryanair and FlyBe have been cancelled.

Both Aer Lingus and Ryanair told customers that a refund or a free change of flight are available to passengers of cancelled flights.

Some 360,000 ESB customers are currently without electricity. It’s expected many will be without power overnight.

The outages are mostly in the southern counties of the country. The main affected areas are counties Kerry, Cork, Tipperary, Waterford, Wexford and Limerick.