KERRY-BASED STARTUP Mobacar has just closed a major funding round to help roll out its car hire technology and the young firm expects to be turning a profit by the end of the year.

The two-year-old company’s software connects car rental outfits with businesses that are interested in using their services, such as airports or travel agents.

When someone who is travelling goes to make a booking with an airline or a travel agent, Mobacar’s software predicts what mode of transport the person will be looking for and looks to offer them the deal most suitable to them.

The firm then takes a commission on each sale that is processed using its software. The technology ‘learns by doing’, which means it can more accurately predict customers needs’ or preferences the more it is used.

Last year, Mobacar raised €2.75 million from a group of investors, including Dublin private equity firm Delta Partners, which was thought to value the business at about €20 million. 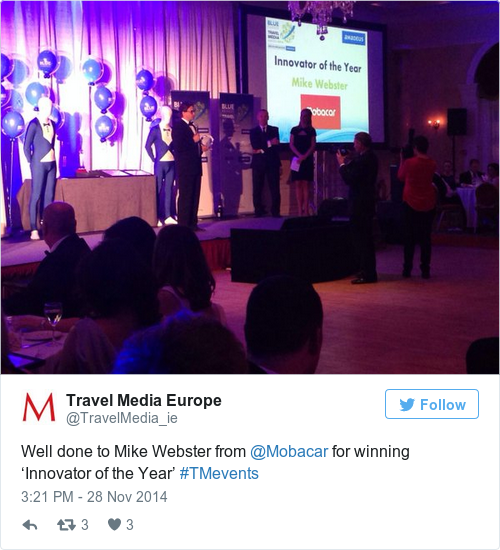 Well done to Mike Webster from @Mobacar for winning ‘Innovator of the Year’ #TMevents pic.twitter.com/6L0jC5Uanw

New accounts filed for the company show that it made a loss of just under €2.1 million last year, up from €1.9 million in 2014.

At the start of this year, Mobacar struck a deal with travel platform Travelport that will give it access to all of the US company’s customers around the world.

“So far we have about 100 clients, and over the next four to five weeks we will go live with about 40 more,” he said.

“The deal with Travelport will go live in October and we will be connected to every one of their travel agencies worldwide, which is 80,000, so it is a huge deal for us.

“Getting profitable isn’t the issue … we would expect to be profitable towards the end of the year.”

Revenue at the firm was worth just under €430,000 in 2015, up from €367,000 the year before, however administrative expenses rose from €2.2 million to €2.4 million as the company invested in its research and development. 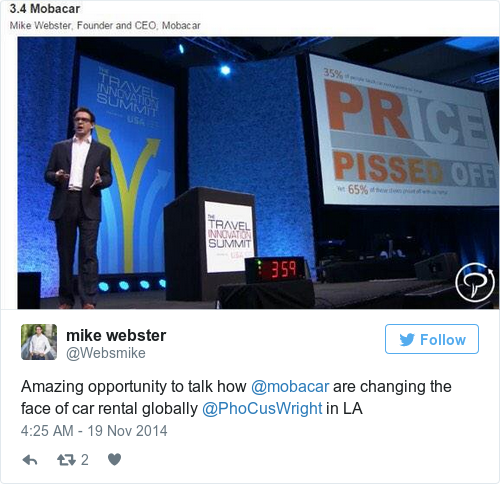 Amazing opportunity to talk how @mobacar are changing the face of car rental globally @PhoCusWright in LA pic.twitter.com/X7ieJfSIlo

It was previously disclosed that the firm planned to raise about €1 million this year and Webster revealed the company had completed its additional funding round only two weeks ago.

While he would not give complete details, he said it was a “very similar size” to the €2.75 million that the firm tapped investors for last year.

“We have raised several rounds now, we have put it all into R&D and product development to properly commercialise the product,” he said. He added that the company now employs about 40 people.