THE ROLE OF large international investment firms is likely one of the main factors behind a surge in cash-only Irish house sales.

That is according to a new study by the Central Bank examining property sales between 2000 and 2014 which found that there was a has been a surge in cash buyers since the boom.

The volume of properties changing hands was much higher during the height of the Celtic Tiger. The Central Bank said that at the height of the boom there were about 150,000 transactions, with cash buyers accounting for 25% of these sales.

After the housing bubble burst the volume of transactions fell to a low of 21,000 in 2010. This has recovered somewhat, and the Central Bank estimates that about 45,000 properties changed hands during 2014.

However, the proportion of cash buyers has risen sharply. The Central Bank defined cash buyers as those who make a cash-only purchase of a residential property without taking out a mortgage.

According to the study, slightly more than 25% of property transactions were carried out with cash at the end of 2010.

Cash-only buys then jumped, peaking at more than 60% during the start of 2013. Although the level of cash buys reduced somewhat afterwards, it is estimated that more than half of the properties purchased during the last three months of 2014 were paid for by cash.

The Central Bank noted that cash buyers can include older households opting to downsize, as well as private investors using property as an alternative to low-yield deposits. 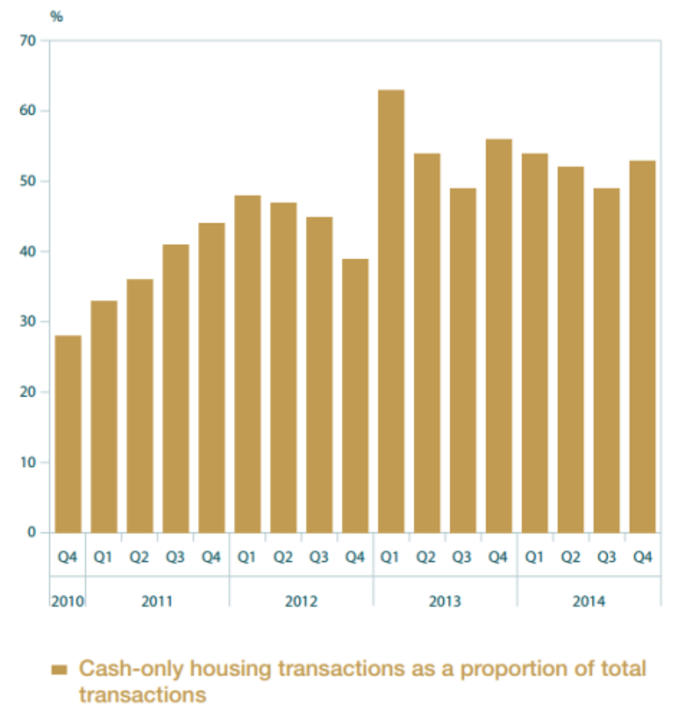 However it added that such individual household cash buyers “are complemented by institutional investors such as the growing indigenous Real Estate Investment Trust (REIT) sector and international investors”.

The study said that it is likely that the presence of cash buyers, in both volume and proportionate terms, reduced as the property market reached its peak around 2006.

It said that while the current volumes of cash-only sales “are not entirely out-of-step with equivalent volumes in the early 2000s, albeit that cash buyers in prior years were operating in a more competitive, vibrant market”.

However, it added: “We estimate that cash sales as a proportion of the total have risen steadily in recent years.”

“This again reflects the market cycle as investors have responded to the opportunities available for low-cost acquisitions (including purchases of property assets from receivers or by way of auctions.”

The study said that the “composition of the cash buyer cohort in Ireland will also have changed”.

“Whilst it is true that cash sales have been a feature of this market for many years, in more recent times we have seen a greater role being played by institutional and international investors, including acquisitions by speculative international asset management groups,” it said.

The high number of cash buyers in recent years has been one of the possible factors cited for the increase in property prices, with some claiming that wealthy investors and funds with increased purchasing power have increasingly priced ordinary buyers out of the market.