THE HEAD OF Dell Ireland, one of the largest companies in the country, has called on on the UK to stay in the European Union.

Niamh Townsend, General Manager of Dell Ireland, said the company is supportive of an ‘In’ vote in the upcoming referendum, which will see the UK public asked if they want to remain as part of the European Union.

Speaking today, she said: “When you look at the trade between Ireland and the UK, it’s massive.

“We are supportive of Britain continuing to be a part of the EU. We think that Ireland, the UK and the European Union, together, are stronger.”

When asked of the potential impact a so-called Brexit may have on the tech giant’s Irish operations Townsend said: “When I look at being responsible for the Republic of Ireland and Northern Ireland, even the idea of movement is a concern.

“I also think Northern Ireland could be a loser in this scenario. It has made a lot of efforts towards encouraging more FDI (foreign direct investment), and this could stall that effort.”

Dell, which is best known for its computer manufacturing operations, employs 2,300 people between its three campuses in Cork, Limerick and Dublin.  The Dublin and Limerick sites account for the bulk of its Irish staff.

Scotland: In or out?

Townsend was speaking at the British Irish Chamber of Commerce Annual Conference, which was hosted in Dublin today and looked to address the issues of Brexit and the upcoming general election.

Also speaking at the conference was Scotland’s Minister for Europe Humza Yousaf, who also strongly advocated an ‘In’ vote in the Brexit referendum. 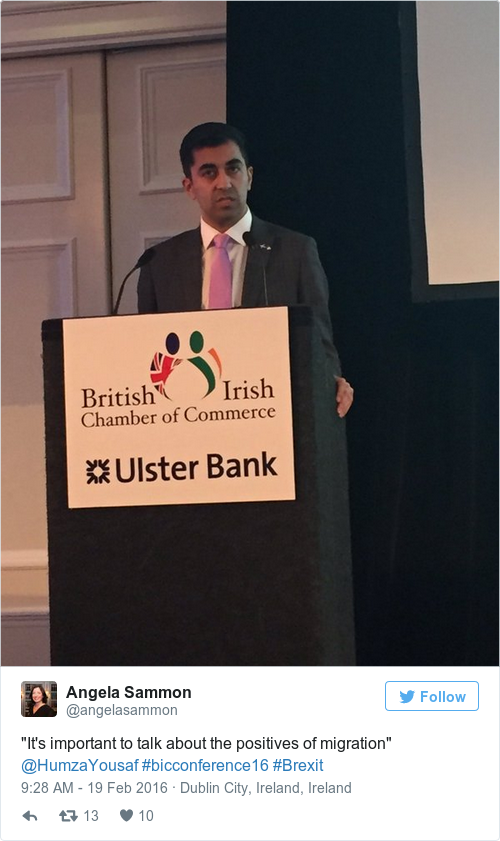 Support for the EU has been stronger in Scotland than in England, where public opinion is largely split 50:50.

Yousaf said: “We could end up with a scenario that Scotland votes to stay within the EU and the rest of the UK votes to leave and then by default the people of Scotland would be dragged out of the EU.