HUNDREDS OF BROWN packages line the new Beumer machine of An Post’s recently opened parcel hub. A truckload of Amazon products for delivery has just arrived at the facility based near Ballymount in Dublin.

It’s two weeks before Christmas and the busiest time of the year for the postal service, as the number of parcels handled by the company has increased by 40% since this time last year.

Garrett Bridgeman, managing director of mails and parcels at the semi-state, pulls out a black square box, one of the few without brown cardboard packaging and a black Amazon arrow. It’s got a picture of a Game of Thrones-style dragon egg on the outside.

The egg will be fed onto the black conveyor belt once the machine starts – with smart OCR or optical character recognition technology reading the address and deciding which part of the country it will be heading for, sending it to the correct chute.

With the smooth running logistics of the parcel hub, that egg will reach its destination by tomorrow morning. Last year, it could have taken between three or four days when the parcels were handled manually.

The €15 million newly built hub can process 13,000 parcels an hour and is taking the postal service into the 21st century, future-proofing a business that employs more than 7,500 nationwide. 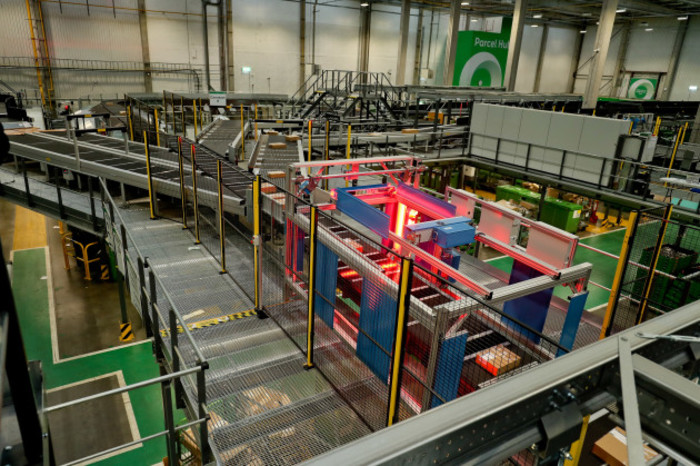 An Post has had to rethink its economic model over the past few years. Bridgeman says Irish shoppers have come late to the online shopping game, but most of the major retailers are now experiencing huge growth and the mail delivery service has to cater for that – including future growth.

“We needed this facility to help us handle that volume,” he explained.

Five years ago he said the busiest night before Christmas saw 18,000 parcels handled. The night before Fora arrived, the hub handled 120,000.

“The week after Cyber Monday we handled a million parcels. That would have been around 650,000 for the same period last year and it would have happened across all the sites,” he explained.

“We can go to Arnotts now and say, we know you will be up by 30% next year and we have the capacity to help you,” he explained.

It’s a different story to 2016. Back then, the semi-state was in the red, with a loss of €12 million reported. It’s had to do a bit of a shakeup, with mail volumes declining by 50% in the last ten years.

Online shopping was identified as one way An Post could turn itself around. The company has forged partnerships with retailers such as Amazon, Zara, H&M, as well as other stores to deliver packages through the services.

Bridgeman says changes have been made to its letter business, which includes cutting staff. In June this year, the company announced it would be closing the Cork mail centre, which could reportedly result in more than 200 people losing their jobs when it shuts in March.

“We have fixed the economics of the letter business… We’ve reduced our staffing levels on that side, put up the price of the stamp, but we have invested heavily in our parcels side,” he said.

“We are in the process of closing the Cork centre and relocating the work there to Athlone and Portlaoise. The whole idea is to use the surplus capacity in those two centres to ensure that we maintain as much employment as possible there,” he said.

The parcels hub currently employs 120 people with the company employing a further 500 at the Dublin Mails centre next door. That figure increases to 880 during the busiest Christmas season.

The 4,500 postmen and postwomen that make the rounds every morning to houses and businesses around the country make up the bulk of the employees.

When asked by Fora if the company has any plans to open any more automotive hubs at in any of its other centres, Bridgeman said the company will continue to look at what equipment should be used but at the moment it has no plans to open or close any more hubs.

“This is about moving the investment away from investment in letters technology into parcels and e-commerce technology,” he said.

“Our letter volumes are down 50%, so we have surplus capacity in letter sortation and we need to modify that and put in parcel sortation. There will be no new sites but maybe a re-purposing of existing ones,” he said. 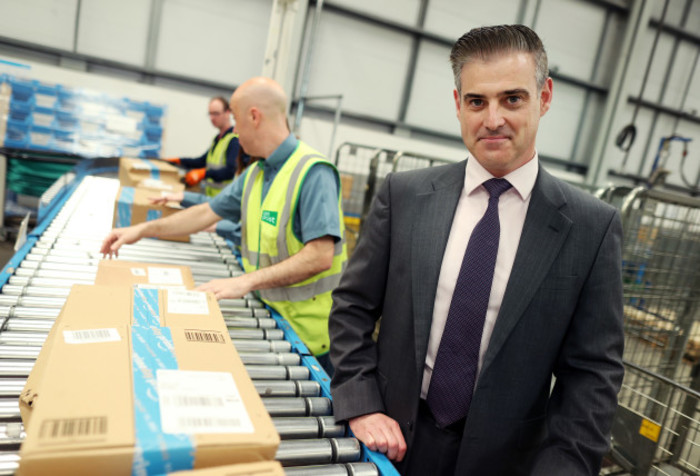 The hard work isn’t over for An Post yet. The organisation is already building another machine next door, for smaller packages that are coming into the country from China.

Bridgeman told Fora that 3 million of these packages have been handled by the facility this year, alone.

“Really with the advent of social media buying, if you look at the likes of Wish.com and Alibaba. They’re heavily targeting social media sites with low valuations, and these will be items purchased for less than €10 phone covers, small things like that,” he explains.

As China’s status is still that of a developing country, it received cheaper postal fees – as set by Switzerland-based Universal Postal Union – than other countries, but An Post has been lobbying against that.

“Over the last two years, we led a trade mission with our colleagues in the US Postal Service to get higher rates from China. The net effect of that deal was €30 million to our bottom line over the next six years,” he said.